One of Doctor Who’s most famous unmade stories will finally see the light of day courtesy of audio drama producers Big Finish. 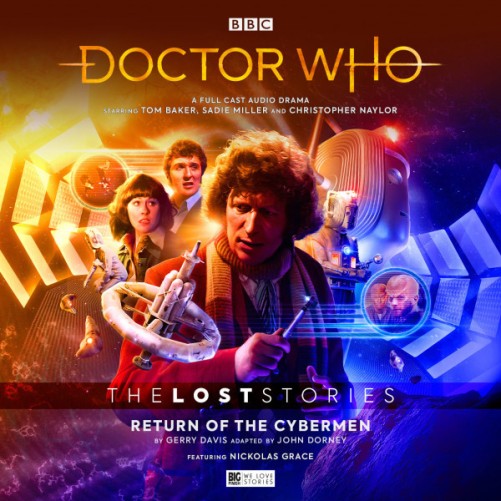 As part of their Lost Stories range, Big Finish is adapting Return of the Cybermen – an unused script by the monsters’ co-creator Gerry Davis.

The Doctor, Sarah Jane Smith and Harry Sullivan return to Space Station Nerva in search of the TARDIS. Instead, they find peril, disease and… Cybermen!

These cybernetic monsters have devised a plan to eliminate the greatest threat to their existence. And if the Doctor and his human compatriots do not play their part in this scheme, they are to be destroyed.

“I’d known of Return of the Cybermen for many years, but it was only relatively recently that I was able to source Gerry Davis’s script thanks to some great detective work by archivist Richard Bignell!

John Dorney’s adaptation stays true to the original script and the era, though there have been some very minor changes to bring it in line with the kind of amends we believe Robert Holmes would have asked for. Little things that make it sit comfortably in season 12.

“It’s rather different in tone to Revenge of the Cybermen – darker, scarier and more reminiscent of claustrophobic 1960s Cybermen tales like The Moonbase and The Invasion.”

“It was interesting working with Tom on this, because he noticed the difference in style immediately. This is Doctor Who as Gerry Davis imagined it in 1974, and it’s very much like he wrote Doctor Who in the mid-1960s. So the script didn’t quite have the same levels of emotional sophistication and wit that was present either in what Robert Holmes eventually crafted into Revenge of the Cybermen, or certainly the more recent Fourth Doctor Adventures we’ve made on audio.

I imagined what it would have been like, back in the day, if Tom had been presented with this script to rehearse and record. If you look at the script book of the first Tom Baker season, you can see masses of line changes that were added by the cast or director during rehearsals and shooting in all those stories. Some of them are the best, most memorable moments, so I reasoned that it would be a faithful process to take on board Tom’s suggestions for this production of Return of the Cybermen.

We had loads of fun, as usual, with Tom finding it particularly amusing when I was directing him with a Cyberman voice effect. At one point, he asked, ‘Is he talking to me?’ which made us all laugh out loud!”

This audio feature will feature:-

Return of the Cybermen is available for pre-order on the Big Finish website and from Forbidden Planet here.

Check out other Big Finish reviews.