The ‘Doctor Chronicles’ is one of those ranges that exists out of necessity, despite what certain corners of social media would have you believe. With the acquisition of the Doctor Who license up to Twice Upon a Time, but only David Tennant officially coming back to the role of the Doctor (and even then not as much as Big Finish would like due to his busy schedule), the types of stories with New Series characters that could be told became limited. Essentially there had to be spin-offs such as Torchwood and The Paternoster Gang, or Short Trips like The Jago and Litefoot Revival. But with The Companion Chronicles being one of Big Finish’s more highly acclaimed ranges, adapting the format to the Ninth through Twelfth Doctors with one narrator and one guest, beginning release in 2017. After one release for each Doctor, the BBC intervened and suggested that the series move away from the initial format and into a full-cast audio format, making this range the only full-cast adventures for the Eleventh and Twelfth Doctors (as Eccleston has returned to the role and Tennant has increased his output). This change begins with The Eleventh Doctor Chronicles: Volume Two which stars Jacob Dudman in the role as the Doctor. While Big Finish use Dudman for the Tenth, Eleventh, and Twelfth Doctors it is actually his Eleventh where his performance excels. Throughout this set he captures the voice of Matt Smith’s portrayal, while adding a depth that many of Smith’s episodes seemed to lack, an emotional core rarely seen during that period of the Moffat era. Each of these stories are set in between The Angels Take Manhattan and The Snowmen, and there is this something that Dudman can coax out of the character, it was seen here and in his cameo in Thin Time/Madquake last year. It is also perhaps important to note that this review is coming from the perspective of someone who is not the biggest fan of the Eleventh Doctor. 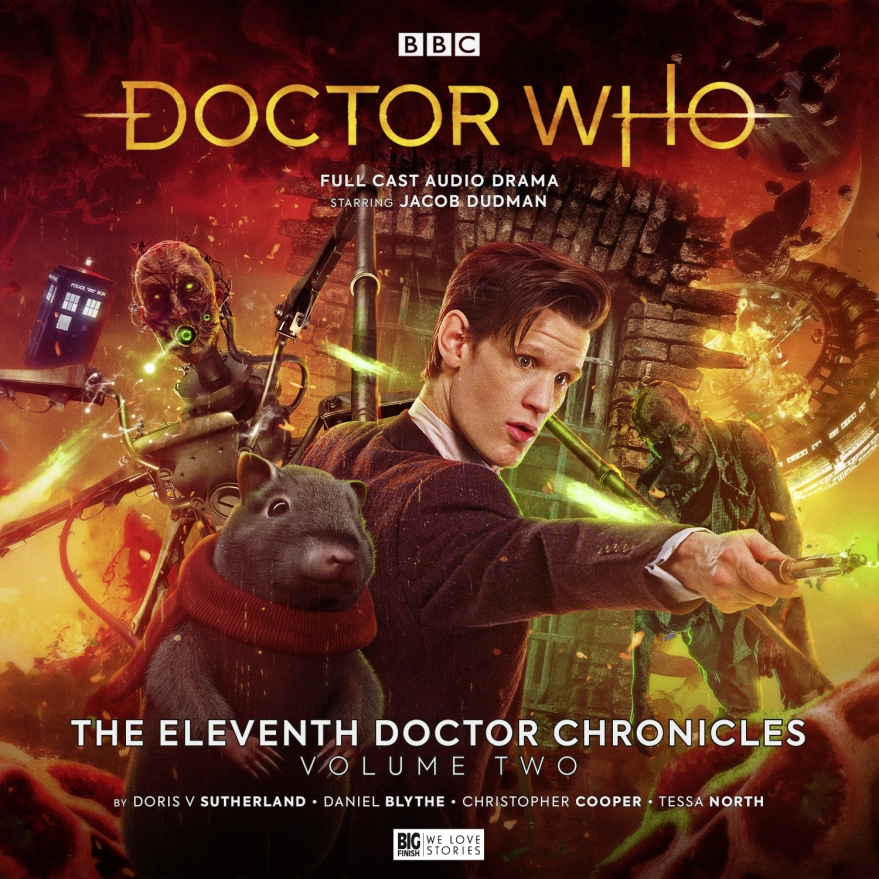 Each of the stories are fairly stand alone with the stand out being the opening; Doris V. Sutherland’s The Evolving Dead. Sutherland provides an hour-long adventure which provides a nice mix of action, heart, and just a little bit of camp. On the surface it begins as a standard zombies in space story, almost reminiscent of Oxygen, but without the commentary on capitalism, in its place themes of Richard Matheson’s I Am Legend. The trick to the story is Sutherland setting it after a disaster and the Doctor being responsible for piecing things back together before the first of many twists involving the zombies which then turns back to the traditional but with an added bite. Ayesha Antoine guests as Babs, a scientist who has lost her boyfriend to the zombies (played wonderfully by Tom Alexander) and just wants to find a way off the research station before things get worse. There is eventually this brilliant little twist involving how the zombies ended up existing and why the artificial intelligence only seems to work for the Doctor, a deadly twist. Sutherland also writes this for only five characters including the Doctor, meaning that the hour is enough to get intimate with these characters. This is only Sutherland’s second Doctor Who script and it is a resounding success.

The second story was one to give me pause. Those who follow me will know how much I enjoy the Virgin New Adventures, and The Day Before They Came is from Daniel Blythe, author of The Dimension Riders and Infinite Requiem, two incredibly weak books from the range. It was then a pleasant surprise to see that Blythe had improved over these two previous novels. The story is back in the 1950s with an alien hiding on Earth, essentially a student doing reconnaissance while there is an impending alien invasion (the aliens in question being played by director Nicholas Briggs). There is a definite homage to Delta and the Bannermen here, but unlike ^ (which I’ve often joked is Shada 2: Electric Boogaloo) it doesn’t feel like it follows the plot beats of Delta and the Bannerman, probably because that story doesn’t have that in depth of a plot and Blythe at least has the Doctor and Kayla have this relationship throughout, again following the pseudo-companion dynamic which is quite a lot of fun. There are a few things here and there that get grating, especially the man who tries to keep asking Kayla out, but it’s a pleasant surprise from Blythe who I never really clicked with.

The last two stories of the set, however, suffer from similar problems and thus can be discussed together. Christopher Cooper’s The Melting Pot and Tessa North’s A Tragical History both have great premises, the former seeing the Doctor investigate a cult on a planet of rodent like aliens that has a strange resemblance to his own style while the later is set at a prison where it seems the secret to everything the Doctor desires may be held. These are both stories that should create excellent audios and Cooper’s comes closest to that, but North falls flat perhaps due to her inexperience. A Tragical History was North’s first script and throughout there was this apprehension hanging over the script if she should do something bigger, leading to an experience which didn’t click, at least for me. The Melting Pot has some very fun supporting characters, even if the plot is perhaps a bit too standard for my tastes with The Face of Evil feeling very much like an inspiration. There are some bickering family characters who are a lot of fun and having the Doctor be a bit socially inept with this culture is also an interesting angle and seems to fit really well with the Eleventh Doctor, it just sadly pales in comparison to the previous two very interesting stories.

Overall, The Eleventh Doctor Chronicles is a set bolstered by giving the Eleventh Doctor some consistent characterisation and an actual emotional weight which is the through line for each of the four rather disconnected stories. The set falls flat on the disconnected nature of the stories, meaning that each of them feels like they should have their own single release and not be part of a box set leading to some very different highs and lows, though still generally enjoyable. 7/10.

You can get it on download/CD from Big Finish.
Order from Forbidden Planet.

Check out the rest of our Big Finish reviews!